Last Thursday, Becky Rogers and other consultants from Neel-Schaffer Engineering  conducted the first of several public meetings planned to help develop a new comprehensive growth plan for the city.

Residents attending the Nix Center event heard a brief presentation about the goals and benefits of comprehensive planning, then received feedback from citizens at individual stations set up around the room.

"What do you want Fairhope to look like in 10-15 years" was the essential question to be answered.

A good comprehensive plan should answer the following questions:

This is the first of several meetings planned around town in a process that could take up to two years, according to the engineers.

A website is to be set up for the project as well: planfairhope.com.

Municipal comprehensive plans are required by law in Alabama, but are not legally binding themselves.

According to property records, the former Fairhope Hardware Store has been sold to the '301 Fairhope Avenue LLC'; Edward Swingle of New Orleans is the corporation's organizer and Cheryl Stoval the local agent. Purchase price was $1,875,000.

Constructed in the 1920's, it was originally the Peoples' Cooperative General Store, but several other businesses operated there over the years as well (Bill's Dollar store, Piggly Wiggly grocery, etc.). Fairhope Hardware, run by the Bill Baldwin family for decades, closed in 2017.

In September 2019, the Fairhope Planning Commission approved a Multiple Occupancy Project request to subdivide the building into a maximum of six commercial units (four on the first floor; up to two on the second).

The building's owner at that time had applied for official state/national historical designation, according to planning commissioner Rebecca Bryant, architect for the project at that time.

The new owner's plans for the building are not known at this time.

During a special budget meeting last week, the Fairhope Airport Authority approved ground leases for two more private hangars on the east side near where one is already under construction, subject to approval by the Authority's attorney.

Authority chairman Lagarde estimated new revenue from the two new ground leases would amount to about $40K per year.

He said he also received more inquires from investors about constructing several smaller 'T-hangars' to be leased out as well on the southwest side of the airport.

There is a currently great demand for hangar space, he said.

Also, the Authority began considering obtaining a short-term line of credit from Trustmark Bank ($500K to $750K?) to deal with emergencies like those associated with hurricane Sally last year, or other un-budgeted expenses.

To lower interest rate, the city could back the loan or airport property used as collateral, according to the bank's representative Lee Webb.

Chairman Lagarde and Webb estimated the new 2% tax (surcharge) on businesses at the airport may "conservatively" generate $200K yearly. The new tax takes effect at the beginning of the fiscal year, Oct.1.

107 acres of airport commercial land on the west side is for sale.

With the new revenue sources, the Authority hopes to significantly reduce its financial dependence on the city, when the new fiscal year begins on October 1st (currently $320K). 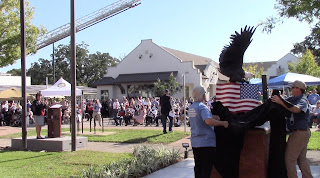 Mayor Sullivan and city council members were on hand this morning for the unveiling of the new 9/11 Memorial at the police station on Section Street.

Fairhope resident Bob Weltlich organized the fundraising for the tribute to all first responders, including front line health care workers during the covid-19 pandemic. 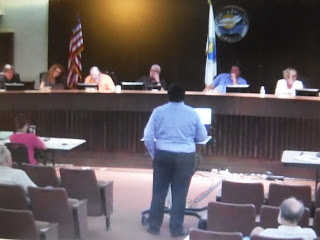 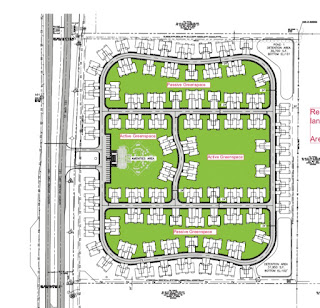 During its August meeting, Rockwell Place, a proposed 206-unit apartment complex for the east side of Hwy 181 just north of Hwy 104, was tabled until a future meeting by the city’s planning commission because it did not completely meet criteria in city subdivision regulations (waivers were requested instead). There was also a discrepancy in the paperwork concerning ownership, according to staff.

Although outside of city limits in un-zoned county planning district 14, the 36 acre property is still within the city’s extra territorial jurisdiction (ETJ) where city subdivision regulation requirements still apply.

Sawgrass Engineering’s consultant for the project told commissioners it is be similar to the existing Old Battles Place south of town, and that a revised plan is in the works with connections to the south and east; he still argued similar private streets are allowed elsewhere in the county.

City planning director Simmons said just a change of the design of interior streets may be needed for compliance.

The project’s engineer requested their proposal be tabled until a future meeting; city staff suggested a PUD may be more appropriate.

Sewage service for this development is to be provided by the private the BCCS; electric by Riviera, and water by Fairhope utilities. 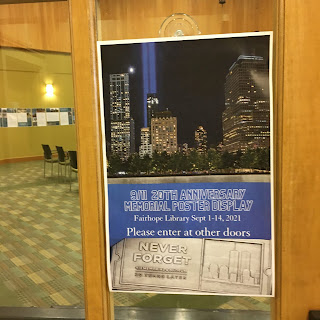 An interactive memorial to the September 11th terrorists attacks, "the day that changed the world," has been set up in the Giddens Room at the library for a two week run.

The exhibit is sponsored by the 9/11 Memorial Museum located at the new World Trade Center in New York: click neverforget.org.

"Located at the World Trade Center in New York City, the 9/11 Memorial Museum tells the story of 9/11 through media, narratives, and a collection of monumental and authentic artifacts, presenting visitors with personal stories of loss, recovery, and hope."

The city will hold its own ceremony on Sept. 10, outside the police station. 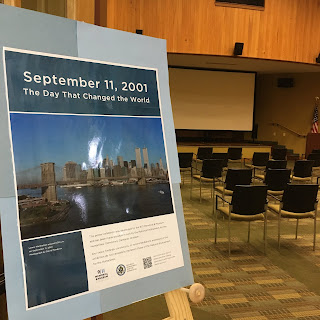 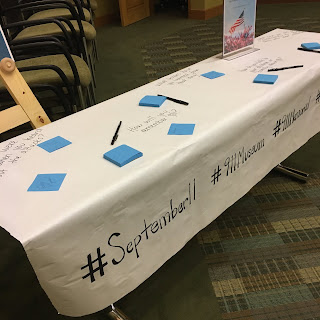 Hurricane Ida Passes To The West 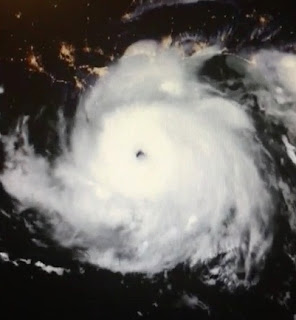 The city council declared a state of emergency yesterday

The city council authorized mayor Sullivan to execute an agreement with Walmart Stores East L.P. of Bentonville, Arkansas for their leasehold for 12 acres of land behind their store on CR 48 in east Fairhope ... in return for $100.

The subject property fronts CR 48 on the north, the River Mill neighborhood on the east, and the store's drainage basin on the west side.

FOR SPECIFIED PUBLIC USES ONLY

A condition of the sale stipulated that the property only be used for a police precinct station ... and other stipulated pubic uses, such as library, senior center, fire station, education facility, greenhouse, park, playground, art/culture center, et al.

Some other uses may be permitted as well, with prior approval by the corporation .

Jails are not permitted; a clarification made during the council meeting in answer to a question by councilman Martin.

Complex negotiations for the property have been going on for over two years; one holdup was a change of attorneys for the corporation, according to mayor Sullivan.

Funding for the new police station may be included in next year's municipal budget (FY 2021/22).

The city's planning commission recommended approval for 'Harvest Green,' a 375 lot, phased, "mixed-use" housing development proposed for 193 acres on both sides of Highway 181 (currently outside city limits), about a quarter mile north of Hwy 104, adjacent to 'The Waters' neighborhood.

Current owner of the property is Silverhill Enterprises Llc; the city is to provide natural gas and water service; sewer is to be split between the city and private BCSS. Electricity is by Riviera Utilities.

Space is provided in the plan for a new fire station, when needed. No commercial use is being proposed anywhere in the project.

A traffic study and other technical requirements must be met before final approval, according to city staff. (This stretch of highway is being 4-laned.)

Since this is a PUD, planned unit development, and concurrent annexation is requested, the city council has final approval authority.

During its August meeting, the city’s Airport Authority unanimously approved a resolution based on ones used at other airports “to add 2% surcharge/fee for goods sold and/or services rendered by airport operators.” Designated pilot license examiners were excluded because that is not considered a “commercial activity” and a fixed $200 fee was set for sales of aircraft and engines. It will not apply to fuel sales either, because of existing fees (7 cents per gallon).

The fees will take effect on October 1st; notices and forms are to be sent out to all vendors before then.

Councilman Burrell, a member of the authority, called it a “necessary fee” to help the airport become financially independent from the city. This year the city provided a $320K subsidy to the airport.

The authority’s Treasurer Amy Pearson was not yet sure how much the new fee would generate; she will submit a proposed budget for the new fiscal year at their September meeting.

Chairman Don Lagarde said he had received two more inquiries from private individuals interested in leasing airport land to construct their own hangars; the authority’s attorney was assigned to negotiate.

A proposal from last month by Dave Gordon (Tellus Development) to lease airport land to construct 20 additional T-hangars (for renting out), instead of the authority doing it itself, still stands, according to Lagarde; but councilman Burrell objected and wanted more time to take another look at the numbers before proceeding.

Burrell said he thought the lease might be lengthened (from 15 to 20 years) and the city could help finance for lower rates, to offset much higher construction costs now from when the project was first proposed about two years ago.

If the project is too costly, rent for the hangars could become non-competitive, according to other members.

* Treasurer Amy Pearson said she may have to cash in a CD early for sufficient funds to make a $250K bond principal payment due in September ($48K shortfall). (Insurance-related and other cleanup costs related to Hurricane Sally were primary causes for the deficit.)

*The authority will have to decide next month whether to renew airport consultant/manager Jason Wilson’s contract.

*Nominations were made for officers for the authority for next year, to be voted on in September. (Same ones as this year.)