A lady from the city of Mobile notable for her unusual manicure has taken up residence again at the library -- after disappearing during colder winter months.

She can often be found at the municpal beach pavilion during overnight hours searching through garbage cans, possibly for food.

Usually reliable sources have identified her as Wanda Hudson, who lost her home to forclosure in 2002 and was inadvertenly locked in a storage locker she had been living in; an attorney in that case had an office in Fairhope area at one time.

According to Chief Petties numerous private individuals, government agencies, churches and other charites have offered help over the past several years, but she refuses or always returns to homlesness.

Serious health issues may be mostly-responsible for her condition according to published reports; no laws are being broken since it is all public property.

She has been growing her fingernails since childhood, according to reports. 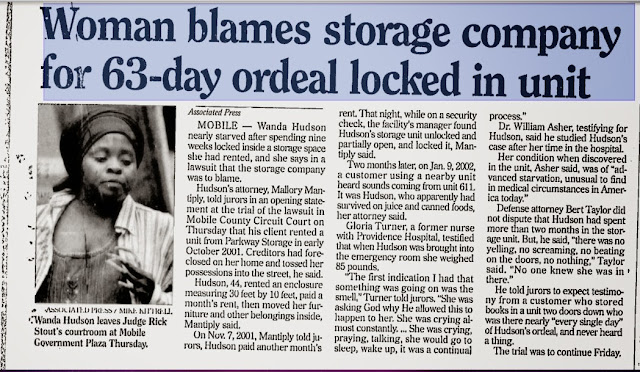 why can't you leave her alone , she is not hurting anyone, try to help her instead of making her a news story!!!!
if you were interested in helping her you would not make a public display of this story

I don't think it's a problem for Fairhope Times to let us know a bit of her history. It helps me know how to help her.

every town has someone in it that is just a bit different. sometimes they get notoriety, sometimes they don't. I lived in Austin Texas for a couple of years. there was a guy there by the name of Leslie. everyone knew who he was. he was easy to spot because he was a crossdresser when he wasn't nude riding his bike through town.

If more knew her story they would probably not just stare at her on the bench and try to help her. She too has a story as we all do!!! She makes choices daily just like everyone else and she has her beliefs that she holds strong to. To know her story is to know her and why she is where she is..., whether by choice...or other

yeah right , how do you think that makes her feel with a camera in her face?

so you have to know her history in order to help her? It is all gossip.

I would do anything to help this woman, but she refuses. I've tried talking to her and got no response. At the same time, I don't pay my taxes to have someone like this frighten children as they enter the public library or deter people from going into the downtown businesses. It's so complicated because we want to offer aid, yet she won't cooperate. Very difficult situation, indeed. Thank you for shining a light on a problem we all should care about.

Why don't she get a job and help herself? Get her nails done. Probably on the welfare to.

I Dont understand why some of you even commentrd. She had to of told them her story in order to write this article as well take her picture.
Respect the opinions of others,especially ones with good intentions. If you Dont agree or have something negative to say then say nothing at all. There is no wrong in wanting to help, in caring,and having a big heart.
I commend anyone who displays random acts of kindness and paying it forward. Bitterness hurts no one but yourself and that is no way to live.
I wish you all well and hope everyone will be able to find good in every bad or sad. Life is too short, live every day as if tomorrow never comes..Good day to all.

wow, read before you comment, and practice what you preach

My children are scared of her too and are having nightmares about her. Too bad the mentally ill have to live on the streets in America.

Everyone is on camera all the time now anyway. She may be dangerous and harm some child with those nails.

She refuses to speak to men at all only rarely to women.

If she is mentally ill she has the potentil to do harm.

If she harms a local child, what will you say then?

What would you say if she should harm a local child?

We appreciate everyone's comments and hope this discussion will translate into useful action -- to improve the plight of the homeless in America, most of whom are veterans who suffer alone out of sight.