Proposal Made To Purchase 'Clock Corner' 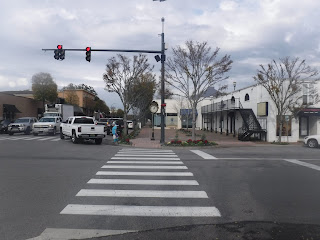 TO BE CALLED 'FOUNDERS CORNER'

Details are sketchy, but the Times has learned the Fairhope Single Tax Corporation's board of directors has voted to seek a partnership with the city to purchase the iconic clock corner; owner Matt Bowers is now willing to sell, they say. 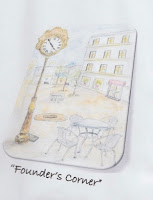 According to the source: "Fairhope Single Tax voted to pay half of the $525K price ... with the desire that the city council would pay the other half. With addition of the city owned property adjoining it, this priceless public space will be preserved for our citizens for years to come."

Council president Burrell says he "likes the idea a lot" but questions the price being asked for the aprx. 26' X 60' lot. Councilmen Conyers and Brown would only say it may be possible.

The council discussed the matter during a private executive session last week.

Some citizens proposed raising funds themselves for the purchase earlier this year, but we do not know how successful they were (click).

The boutique hotel planned for the property could still be built on the remaining parcel, according to a drawing provided. 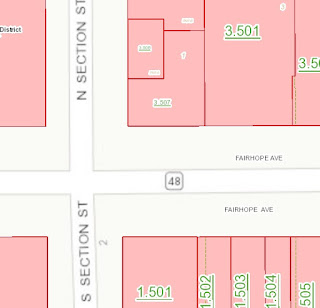 The city should have been proactive and prevented this in the first place. Since that didn’t happen, we all have to pay the price to “make it right” and purchase the property. Not doing so will change the face of Fairhope too much! However, since the owner of the property professes his love for Fairhope, he should put his money where his mouth is and donate the property or sell for a reasonable price.

I know that the citizens, especially the ones that lived here for many years have an attachment to this clock, but 525K ?? while there are so many priorities. [By the way the council should check the Foley Chjristmas lights out, now that is a well executed scene of the down town lights]

Now those Montrose snobs are trying to control time, in addition to space.

The price is ridiculous and money should be used for infrastructure, traffic issues, give law enforcement a raise. It's just a concreted piece of real estate.

Thank is absolutely ridiculous! Let that clock go and purchase another for a 1/3 of the asking price.

In the era of "Fake News", this takes the cake. The "iconic corner" and "town square" that is being peddled to citizens of Fairhope as a historical district was was actually a Ford Dealership owned by James Gaston. My father purchased a 1973 Ford LTD from Gaston Ford that was displayed in the showroom window that is now the Cryo Yoga business. Not sure what year Gaston Ford closed but I believe it was in the 80's which would debunk the idea that this was a historic corner designed by the founders of Fairhope. The corner of Fairhope Avenue and Section Street where the new Boutique Hotel would go was a gas station with fuel pumps. There is a historical picture showing the Gaston Ford Dealership on the corner of Fairhope Avenue and Section Street. Take a look. As a taxpayer, I don't support the City Council spending our money to purchase this corner. If it had any historic significance that would be different, but it was Ford Dealership and gas station. Why would we spend a million dollars to preserve a clock that isn't that old? I can say that only a very few people are pushing this. The majority could care less.

Thank you Single Tax! Please save our clock from the greedy developers. Keep Fairhope Fairhope.

Fairhope will never be the same when our clok couryard is gone. :(

I have never lived anywhere where people become so emotionally attached to "things" that they are willing to pay exorbitant amounts of money to save them. The K1 center and now the clock. Fairhope - you can't cling to the past and sell the future to the highest bidder.

I so agree with previous poster. The clock is NOT a historical piece. I have lived here since 1975. Shoot, I remember half the Ford building being blown down the street during Hurricane Frederick. No clock there then.

Such a stupid comment. "If he loves fairhope......". He can love fairhope and have a different vision than others of what it could look like.

So in other words, the good ol boys just invested in the private boutique hotel, the same one they gave height variances to.
And the beat goes on....

No variance for height was granted; one was requested for a fourth floor (within the allowed standard 40' height) but denied.

This use of office for personal gain is out of hand,misappropriations of funds is out of hand.Put the clock at the pier spend the money on the city infrastructure.Example pay for the sewer upgrades rather than charging an extra 4.00 per month to pay for it.

So many good memories there.

Anyone now subscribed by Email will have to sign up again above due to the old provider discontinuing the service soon.