Handicapped access ramps that were constructed out onto the city sidewalk in front of the old Andres meet city building regulations, according to councilman Boone who said he had checked with the city building department.

The building has been undergoing renovations since Andres closed last summer; federal regulations to add handicapped access are triggered if renovations are extensive enough.

Councilman Burrell worried about setting a precedent for other downtown buildings; councilmen Robinson said there may be better ways to go about it and Brown agreed: "Hopefully, there will be a better solution moving forward."

Mayor Wilson said the city council approved the ramps: "I believe we have to work with the businesses that are bringing buildings to code to serve all patrons."

In some cases the only other cost-effective option may be to demolish the building.

'Back On The Rack' resale now occupies part of the space; we were told 'Mary Ann's Deli' was planning to locate in the other part.

(The Times is still investigating this story. Check back for updates.)

Playgrounds had been closed for about two months by concurrent orders of the governor and city council, to prevent spread of covid-19.

The equipment is to be cleaned and disinfected daily, the same as restrooms.
at 2:33:00 PM No comments: Links to this post

There are many today, but Baldwin county's first golf course was established in 1914 on the east side of the city roughly between Fairhope and Morphy Avenues (west of Ingleside); the nine hole course's clubhouse was located at 651 Johnson Avenue and the building is still being used as a private residence today.

In the beginning, winter tourists from the Colonial Inn were the main players on the course, but the clubhouse was utilized for meetings of various local groups and social organizations,  according to published reports. 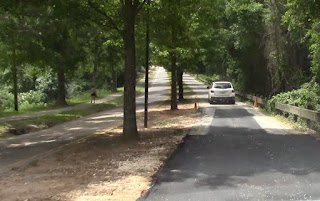 Ingleside Drive at Fairhope Avenue remained closed but repaving should begin there this week as well.

Fairwood Blvd. at Bayou Dr. was closed for a while too today, for "packing" a hole according to a worker.

SOME CUTS ALREADY MADE

Mayor Wilson reported that due to early interventions (cuts) by city administration in March when the coronavirus  pandemic shutdown began, about $1.2 million was saved by postponing non-critical expenses, acquisitions, and delaying scheduled capital projects.

Even so, due to lack of revenue from the statewide business shutdown (mostly sales and lodging taxes) a $1.5 million deficit is still projected. (The city is seven months into its fiscal year.)

Utility revenue was not affected much, she said.

Utility projects, and those funded by impact fees or grants should go ahead as planned she said; but the full impact of the ongoing pandemic on the local economy/city revenue will not be known for another "two months" or so, according to the mayor.

The city council controls the city's "purse strings" and will have to approve contracts for major expenses like capital projects.

The $7 million emergency reserve fund could be utilized as well.

A $5.1 million sewer/drainage project for N. Church Street is on the agenda for the next council meeting.

Other improvements such as a new Rotary Youth Club park layout and improvements to W.C. Majors stadium are pending as well (from impact fees).

(Wilson noted the council's purchase last summer of the new CR 13 Recreation land for $2 million was not in the budget, causing further shortfalls.)

Update 1. The yellow sign was still posted Friday even though water retests were negative. 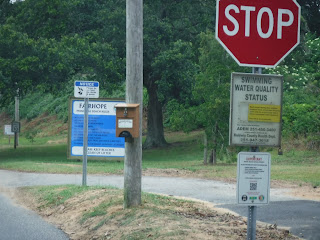 A code yellow possible high bacteria warning (140) was found posted at municipal beach today at 2 PM; a follow-up test tomorrow is required to confirm it for code red to be posted.

An Auburn University study years ago determined both human and animal origins there; bacteria may survive in the sand itself too.

Bacteria levels often rise after heavy rainfall. The last bacteria warning there was posted in September of 2019, according to ADEM monitoring records. (Bacteria will not survive as long in colder water.)

At this time, no sewage overflows have been reported to ADEM.

Yesterday it was revealed that ADEM had filed suit against the city alleging mis-reporting of sewage overflows and other deficiencies since at least 2015. 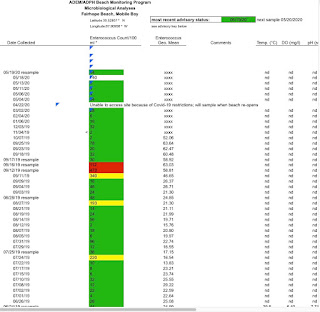 The new Fairhope public school commission held a special meeting to begin distributing revenue from the new 3 mill property tax; the library was still closed so the meeting was held in the south entrance portico.  Four of the five area school principals attended as well.

Most of the discussion centered on proposals for hiring personnel, since that needed to be expedited so principals could "make offers"  for the next school year in a timely manner.

Whether funding for equipment, furniture, etc., should come from the new 3 mills or the existing traditional $300K city funding was debated as well (installment payments for five years for the K-1 building).

Hill Robinson, a founding member of the old Educational Advisory Committee (now disbanded EAC), argued in favor of using the new 3 mills (estimated at $2 million) only for personnel per the 2016 AKRIBOS study (click) that recommended ways for area schools to reach top-ten status in the state.

He said he was ok with using the other funding ($300K for K-1 purchase) for other items though.

Total funding being requested per school was:

(Fairhope Elementary East and West, and J.L. Newton are to all be K-6 this year.)

The commission voted to approve a number of personnel-related requests from each school ... but delayed voting on other requests until their June meeting.

They also began discussing what percentage should be put away in a "rainy day" reserve fund. 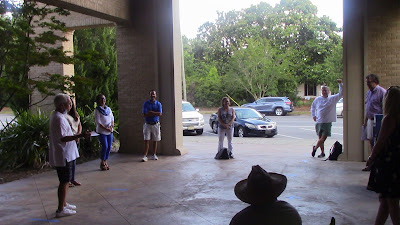 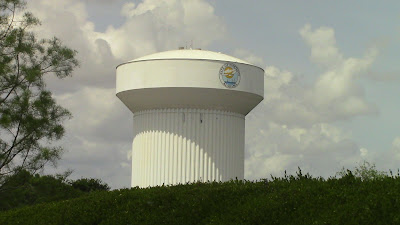 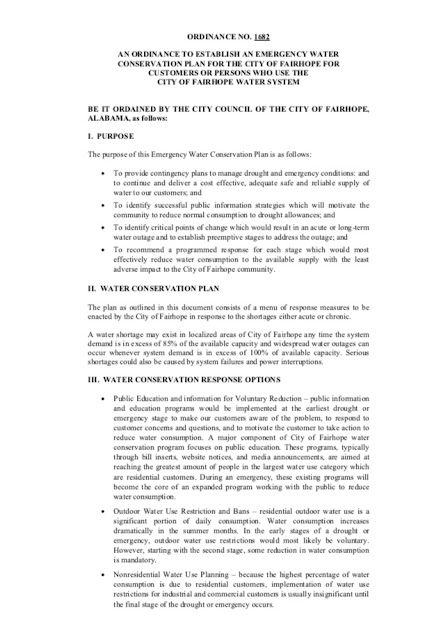 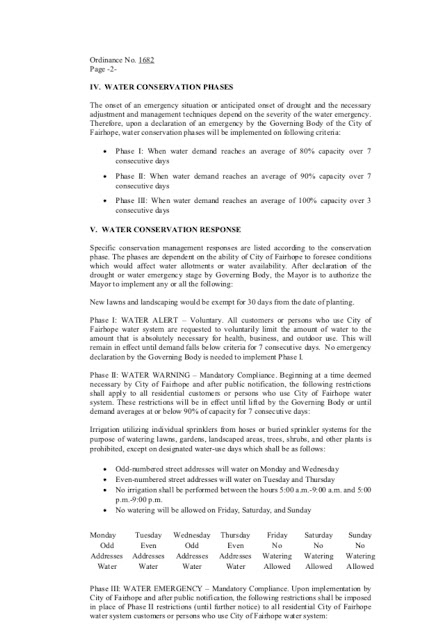 At a special meeting on May 13th, by a 4-1 vote (Brown, no)  the city council enacted  ordinance 1682 establishing a water conservation plan to deal with possible shortages caused by drought, equipment failure, pipe leaks,  or other problems resulting in water levels in city storage tanks falling too low.

The current drought, a pump failure, and water main breaks have caused levels in the tanks to fall to unacceptable levels; providing adequate pressure for fire protection and the hospital are primary considerations, according to water superintendent Jay Whitman.

The ordinance cannot officially take effect until May 27th, to allow time for it to be legally advertised in newspapers per state law.

Even though a new ordinance won't take effect for two weeks (May 27th), the mayor and council are asking citizens to comply with a phase one WATER ALERT now:

* Phase I: Water Alert -- Voluntary. All persons ... are requested to voluntarily limit water ... to that is absolutely necessary for health, business, and outdoor use ... ."

If consumption does not fall below specific targets, the city council may return to enact a water emergency declaration to impose further restrictions with penalties.

Water consumption versus supply on May 27th will determine if these measures will be needed.

Council president Burrell said he hopes the drought eases and the pump will be repaired by then ... and these phases will not be necessary.

Mayor Wilson agreed and added it is good to have an ordinance on the books anyway ... in case it is ever needed again.

After the April course closure due to coronavirus, new golf carts stood ready for golfers returning to play today at the city's municipal golf course; but continuing social distancing rules permit only one player per cart (spouses ok); recommend 10 feet separation too, avoid touching common items too. Tee times are required and no league play during May.  Continuing dry weather conditions were apparent as some fairways and greens appeared parched in places.

The three-hole, lighted course could increase interest in the sport they said, which has been declining recently, especially among the younger citizens.

The $56K construction cost could be covered by impact fees; estimated $70K operational cost would be offset by proposed green fees.

(Foot golf, aka soccer golf, was also considered for this site, but rejected due to lack of space.)

A historic marker remembering early Fairhope residents Nancy Lewis and Frank Stewart has been damaged, apparently by a lawnmower or some other vehicle at the Coastal Community College campus on Bancroft Avenue.

Former Museum Director Donnie Barrett, who was instrumental in erecting the marker,  says it should  covered by city insurance policies.
at 2:08:00 PM No comments: Links to this post

Fairhope Airport Gets Stimulus Check Too 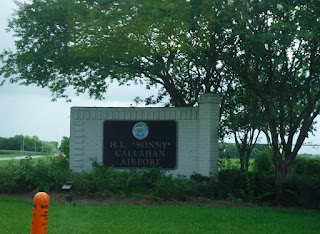